The figures clearly demonstrate the trend, how private landlords have increasingly become relied upon to provide the much needed extra rental housing. 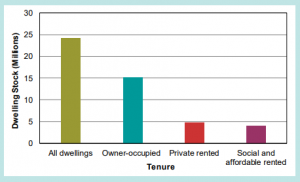 The publication states that these tenure statistics differ from those published from the English Housing Survey which are in terms of households not dwellings. In addition, the dwelling stock figures include vacant dwellings. The trends are consistent. The English Housing Survey is the primary measure of tenure, as the unit of households is the preferred metric, but the Dwelling Stock figures are a useful leading indicator.